This is a friendly, evolving and partial list of members of the ISHTA Berlin community currently teaching in Berlin and elsewhere in Europe. The home of the ISHTA trainings as well as several of the ISHTA teachers in Berlin is Bija Yoga Berlin – we invite you to visit us there!

The founder of the ISHTA Berlin community and director of the ISHTA trainings, Julie has been teaching ISHTA Yoga since 2003, in Berlin since 2007. As the former administrator of the trainings in the ISHTA world headquarters in New York, as well as a co-creator of the current generation of trainings, she aims to inspire all her students with her passion for yoga and knowledge. As the former assistant to Kavi Yogiraj Alan Finger, her ISHTA roots are direct to the source. Other sources of inspiration include master teachers Angela Farmer, Kofi Busia, Glenn Black and Max Strom, as well as her kirtan teacher Jai Uttal. She is grateful every day for this beautiful practice and the opportunity to share it with others! www.julieblumenthal.com.

May connects Yoga with Fine Arts and Meditation. May completed the 200 & 300-hour ISHTA teacher trainings with Julie Blumenthal from 2013- 2015. She trained in a Cunningham Dance Company and studied Body Mind Centering with Linda Hartley. Her interests besides Fine Arts are neuroscience research, psychoanalysis (Lacan), philosophy and the integral work of Ken Wilber. Contact her for private yoga sessions, workshops or ayurvedic massages. mayament@gmx.de.

As the daughter of a Yogi, Juana was exposed to Hatha Yoga from a very young age. In her twenties she learnt Shiatsu, practiced Aikido, and approached meditation for the first time. Shortly after leaving her hometown in Colombia, she began her ISHTA journey in Berlin. During the years 2015-2017 she completed the 200 and 300-hour teacher training with Julie Blumenthal. Juana´s classes are focused on breath and body awareness, restorative poses and bodywork. juana.s.hernandez@gmail.com. 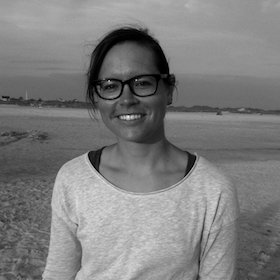 Anne discovered yoga in in Australia in 2003. Though she was far away from home, her first Ashtanga Yoga class showed her the path to feeling home within herself. In 2009, Anne returned to Berlin to dive further into her practice and did the Spirit Yoga 200-hour teacher training. Soon after, she was introduced to the heart-opening practice of Anusara Yoga which continues inspiring her to this day. Attracted to ISHTA’s integration of Ayurveda, philosophy, meditation and asana flow, Anne completed the ISHTA 300-hour training with Julie Blumenthal. Anne now assists in the ISHTA 200-hour and 300-hour teacher trainings and teaches class as a frequent substitute in Hamburg Berlin. www.jyoti-yoga.de/lehrer. 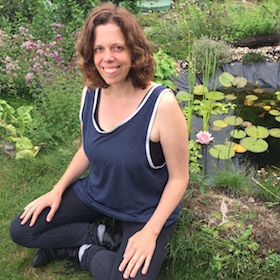 Alice completed her 200- and 300-hour ISHTA trainings in Berlin in 2015. Her other trainings have been in Scaravelli-inspired yoga and with Donna Farhi, and she is currently studying embodied anatomy and kinesiology with Amy Matthews. Alice’s main interest at present is incorporating functional movement patterns and variability into her yoga teaching without losing the energetic quality of traditional yoga practice. She has just reentered teaching after maternity leave, with a gentle class at Kreuzbergyoga in the Wrangelkiez. wandelyoga@gmail.com. 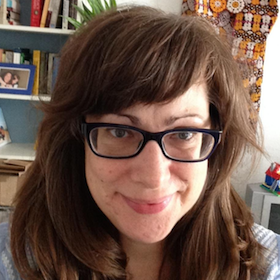 MB believes that yogic tools (asana, pranayama, meditation, and mantras) can help people to connect to their true essence, allowing them to live a life that rings with truth. She teaches down-to-earth Hatha yoga classes that provide space to slow down and connect with your breath, your body, and your internal self; to give yourself and your state of being time and attention.  She is particularly interested in using yoga to address depression and to help people facing or having faced cancer. She is a 500-hour certified teacher who currently teaches classes Tuesday and Thursday evenings at Bija Yoga Berlin, conducts private lessons, and subs at other studios in Berlin. www.shadesofgreen.yoga / www.facebook.com/shadesofgreen.yoga.mb

Lola did her 200 and 300-hour ISHTA Teacher Training with Julie Blumenthal from 2015 to 2017. She loves to travel and wherever life takes her yoga is her companion. As a mother and yogini, she believes in unconditional love that connects all of life. She practices and teaches Yoga as a tool to reconnect. Believing in the power of touch, she is very interested in acroyoga, dance and all kinds of bodywork that include a partner. Currently she teaches intimate yoga classes in a private atmosphere. www.facebook.com/yogamitLola/.

Martina discovered yoga around 10 years ago and since then yoga has grown deeper and deeper into her life. Wishing to explore yoga, pranayama and meditation on a deeper level, she completed the 200-hour ISHTA teacher training with Julie Blumenthal in 2017. Feeling her heart connected to the wisdom of yoga, Martina currently shares her experience with friends and colleagues and in workshops relating to conscious bodywork. martina.ferstl@gmx.de.

Paulina is a dancer and yoga teacher from Poland. In 2015 she moved to Berlin, where she completed the 200-hour ISHTA Yoga Teacher Training and y4c

(Yoga4Cancer) training. Since then she has taught in Germany, Poland and Italy. At the moment Paulina is based in Milan, where she founded English Yoga Milan studio. She offers regular classes and yoga workshops with foundations in the ISHTA lineage. www.yoga-milan.com/.

Kathi completed the 200-hour ISHTA Teacher Training in Berlin in 2015. She moved to Portugal in 2016, where she currently organises and teaches in yoga retreats at O Bosque Farm in rural Alentejo. www.facebook.com/obosque.estremoz/.

More teachers’ listings coming soon! This page is for teachers trained in or teaching with the ISHTA Berlin community. For more ISHTA teachers and resources worldwide, visit the website of the ISHTA New York headquarters here.